At long last I finished sewing my Papercut Sway dress. Swingy trapeze style dresses caught my eye this spring. Lots of examples on my summer dresses Pinterest board. I especially liked the idea of black silk, so I decided to make one for my birthday. 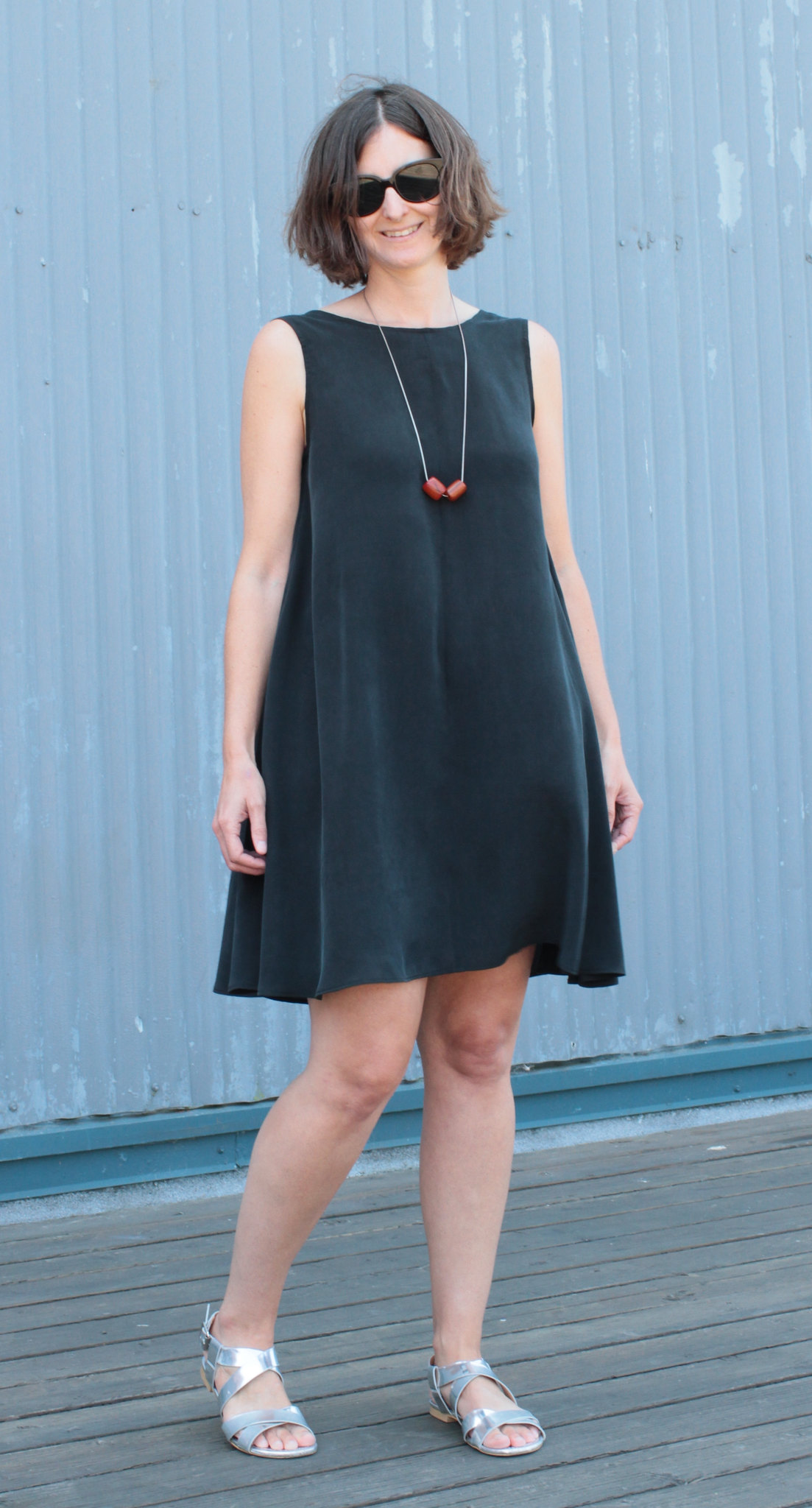 The fabric is a sandwashed silk that I bought back in February. I wasn’t sure what I’d make with it, but figured it would easily work for about a million different garments. Actually, I’m surprised I’m not still trying to decide! And yes, I should have bought more… 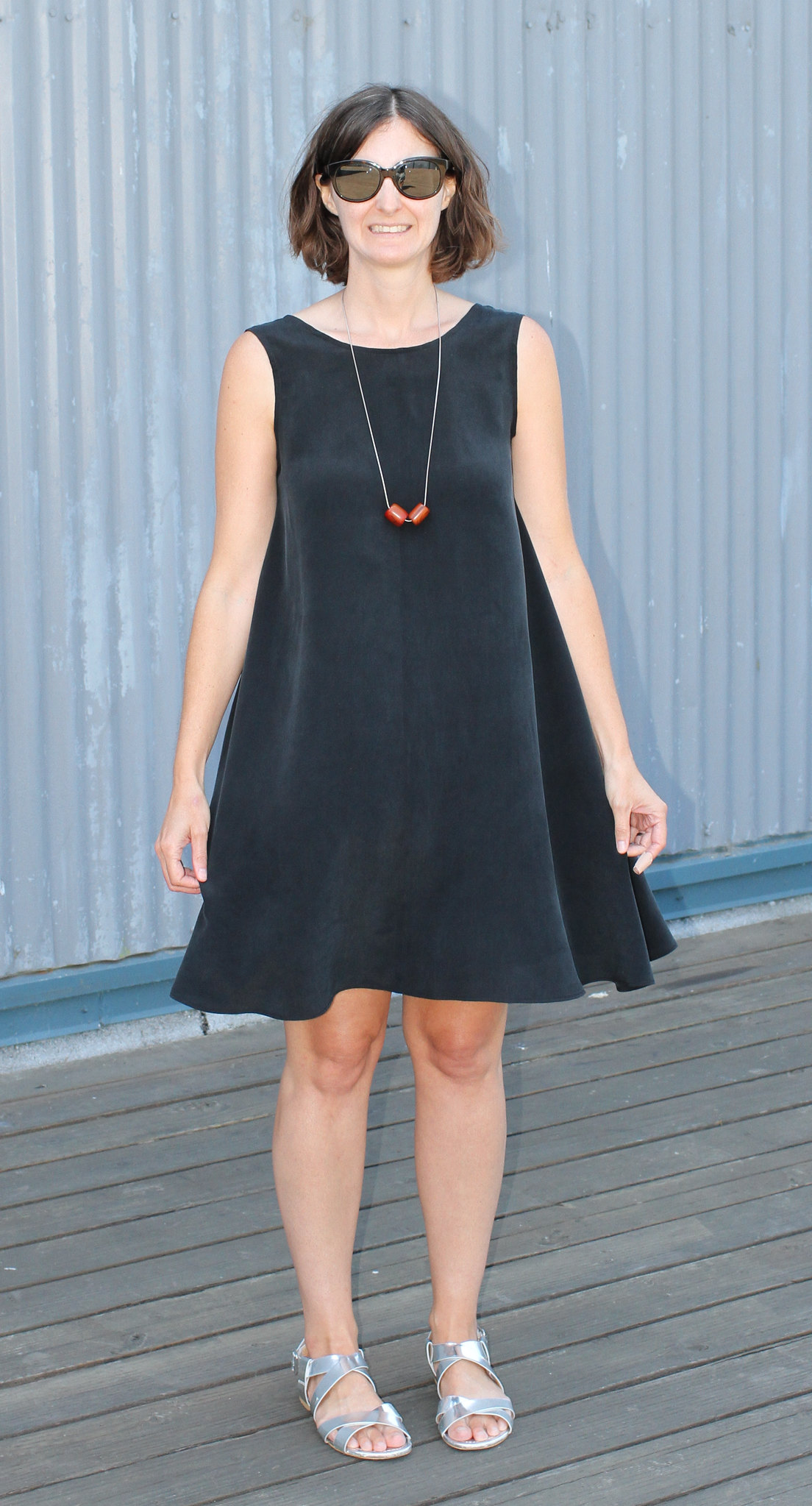 I made the dress using the same modifications I used on my muslin. I cut between an XS and S, used 1/2″ SA and french seams throughout, and did an easy rolled hem a la Grainline’s tutorial. I skipped the facings and used bias binding for the neck and arm scyes. I made it a length between the long and short versions provided with the pattern – since I’m only 5’3″ I thought the long version would be too long, but I wanted a little more coverage than the mini. The only new technique I tried was cutting the fabric out between layers of paper – also courtesy of Grainline. This worked really well. I’ve never had such a crisp cutting line on any fabric! 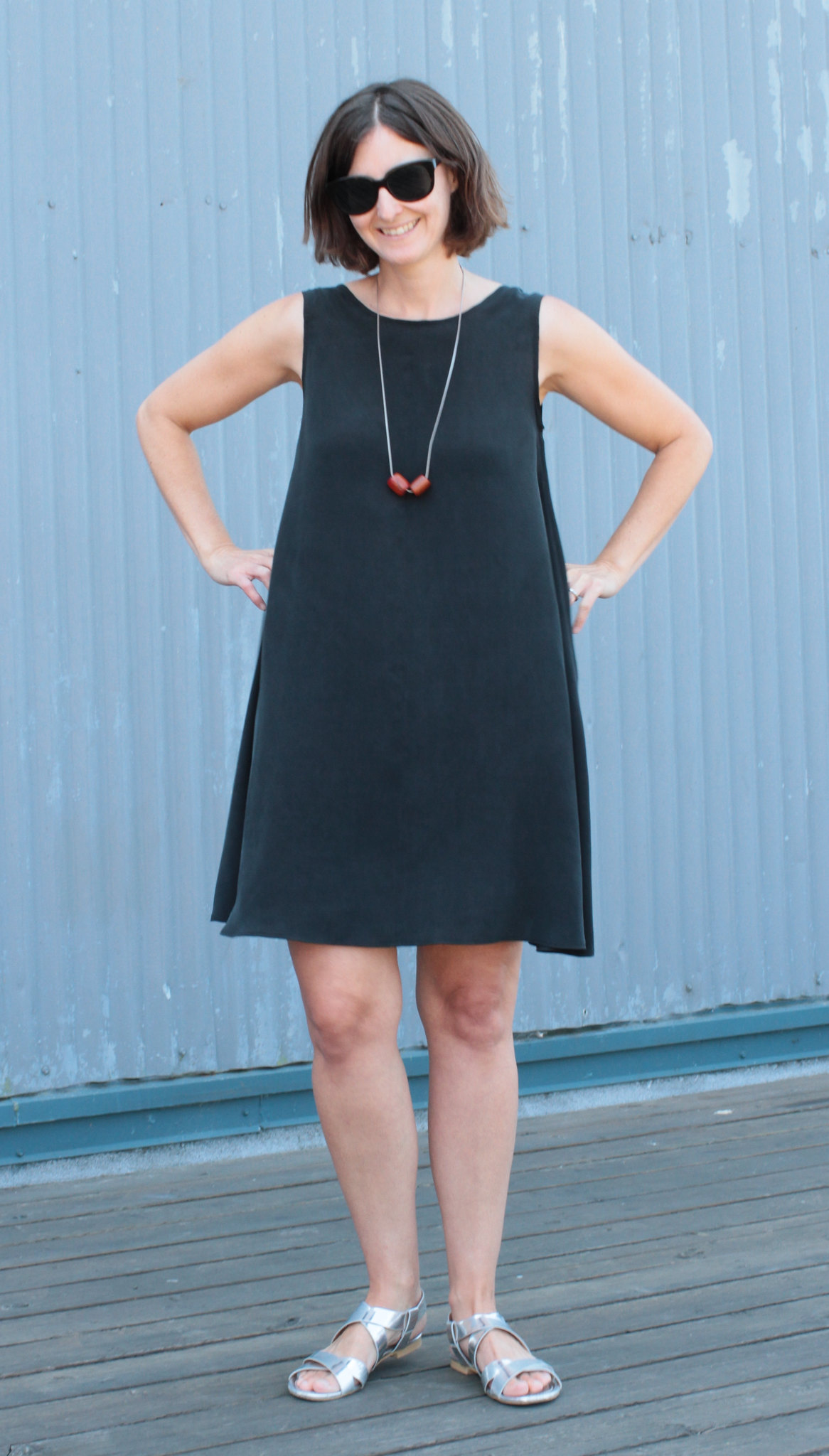 I let the fabric hang for several days before hemming. Then I used Megan Neilsen’s simple trick to even out the hem. Added bonus – since I waited to hem it I got to use my new sewing machine! It’s a Bernina 350 and was a birthday present – so exciting! 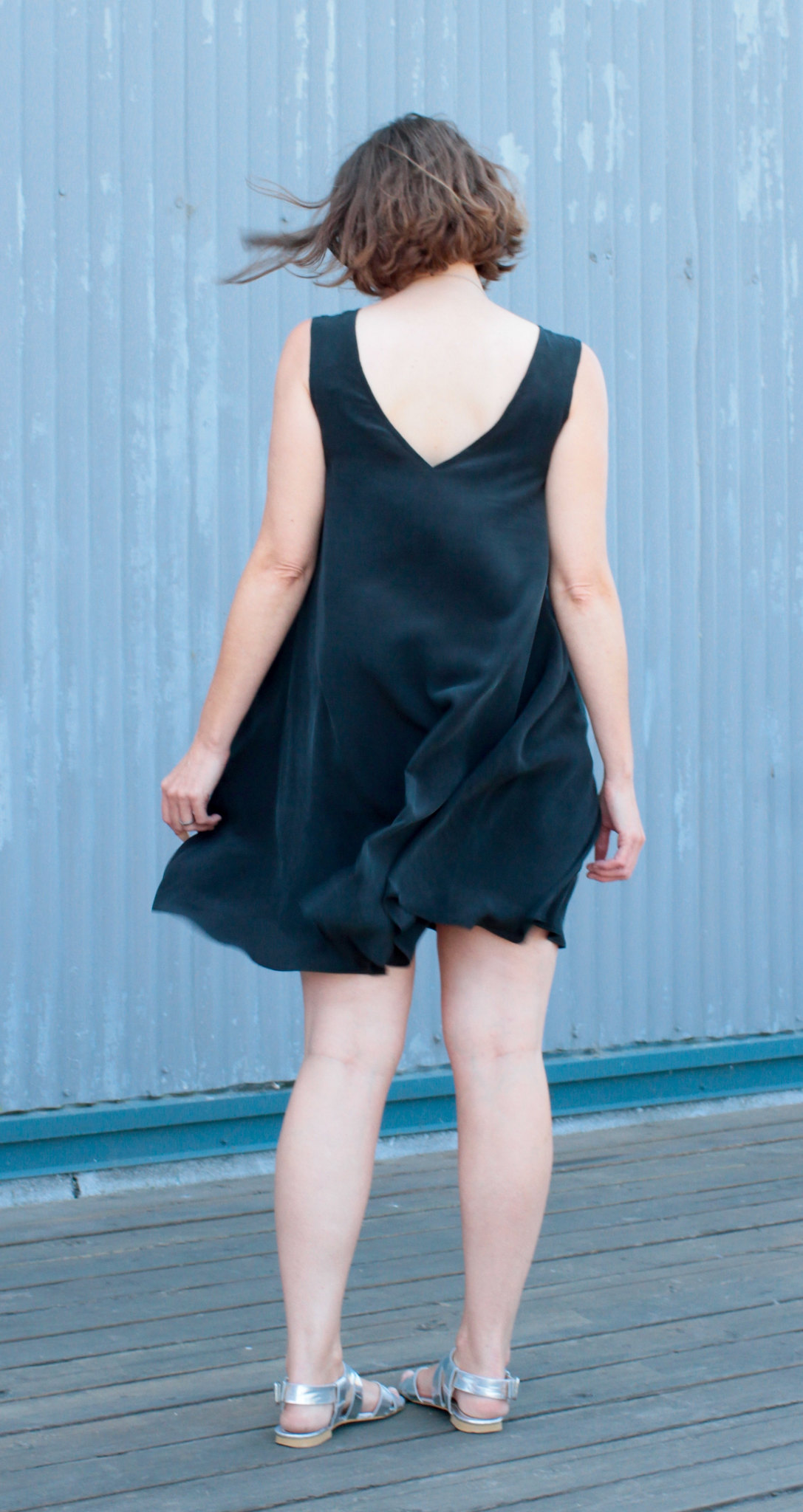 The fabric has great drape and a ton of movement – especially on a windy day. I am tempted to try this in a fabric with more body, perhaps Linen like the Papercut mini version. Linking up with Gray All Day’s Sew it Chic in a Week – check it out!

Hi there! I’ve got a couple of new things to share today. One is a wearable muslin for a new pattern and the other is my third attempt at a pattern I’ve tried a few times. Together they feel like summer! 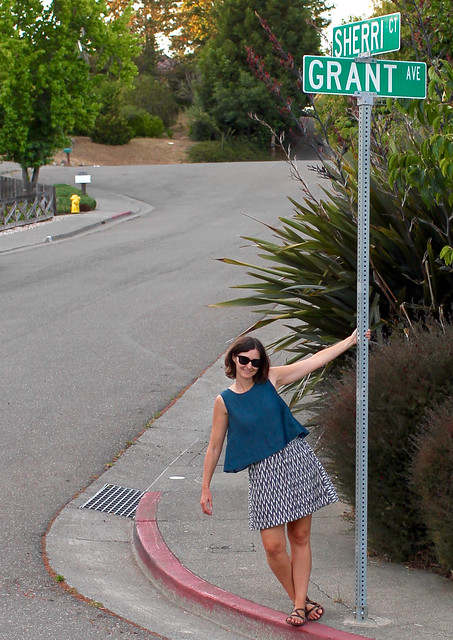 Let’s start with the new pattern. This is the Sway dress by Papercut Patterns. I wanted to test the fit of the neck/arm portion before making the full dress since it uses quite a bit of fabric. I fell between an XS and S on the size chart, so I cut between an XS and S. I wanted to do french seams, so I used a 1/2″ SA instead of the 3/8″ included in the pattern. I also decided to skip the facing and bias bind the neck and arm scyes. The fit seems spot on with no adjustments. And I’ve already cut out a dress. 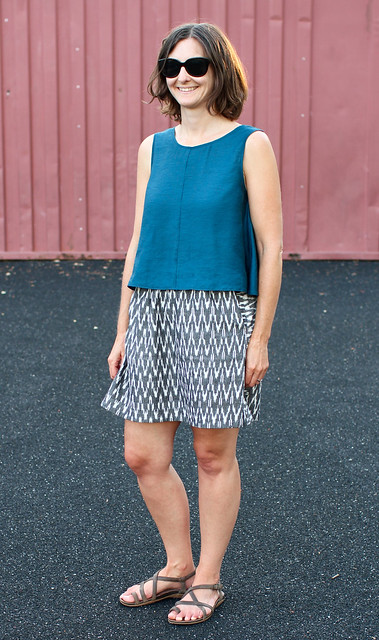 This is made in a fabric that’s new to me. It’s a nylon-tencel blend and comes in a wide range of colors at Stonemountain. Although I think it’s only available in their store. Obviously I couldn’t resist buying a yard to try out. I wasn’t sure what to do with it, so decided to risk using it for the test version. And I’m glad I did – it’s a good fabric for a full swing shape! It’s really light and a little crisp and doesn’t seem to wrinkle as much as rayon. It is a little shifty to sew – more like silk than rayon. It feels really nice to wear and I’ve already bought a couple more yards, though I haven’t decided what to make – ideas? 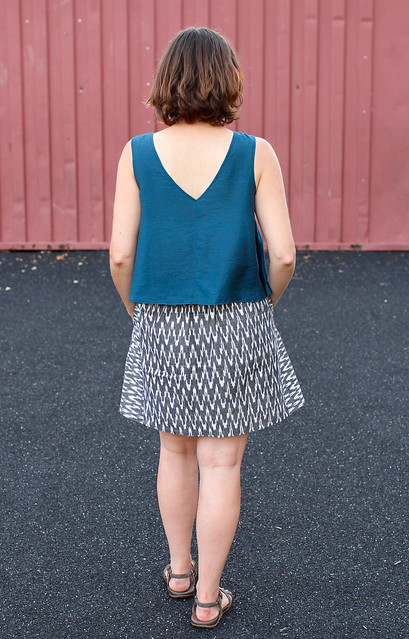 The second garment is an Everyday Skirt. I bought this pattern shortly after it was released because it looks a lot like an old favorite J Crew skirt. The sizing on this pattern is really generous. My measurements put me at a size S, but it was just way too big. I tried again in an XS. Better, but there was still a lot of extra fabric. This time I removed an extra 2″ from the front panel and the back panel. I was a little worried about there being enough room to pull over my hips, but it’s fine. In fact, I could probably take out another couple inches. I also shortened it by 4″ and I hand stitched the front waistband for a cleaner look. I suspect some of the sizing problem is because I like to wear skirts just below my natural waist and this skirt is intended to be worn lower. 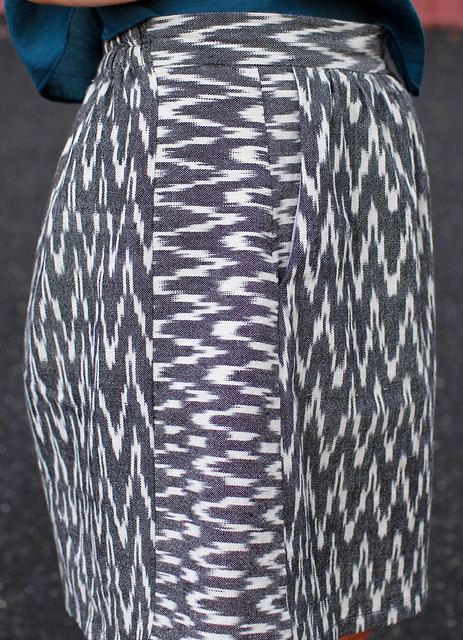 This is made in a 100% woven ikat, also from Stonemountain (and available online). The print varies a bit since this is handwoven and I definitely didn’t want to mess with lining it up across seams. So I cut the sides, waistband and pockets on the cross grain. It’s very satisfying to finally realize my vision for this skirt and I’ve already worn it several times!

I’ll end with a question for you. Have you tried Liesl & Co. patterns and have you found that they run large? Or do Papercut Patterns run small? What about other designers?